By All Means Necessary, the difficult 2nd LP 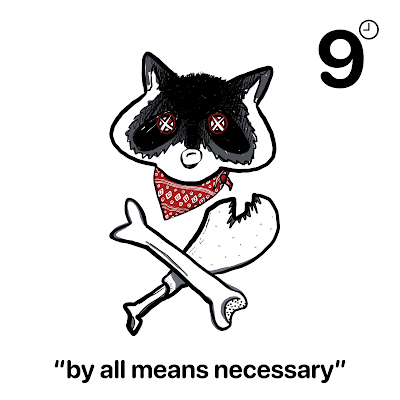 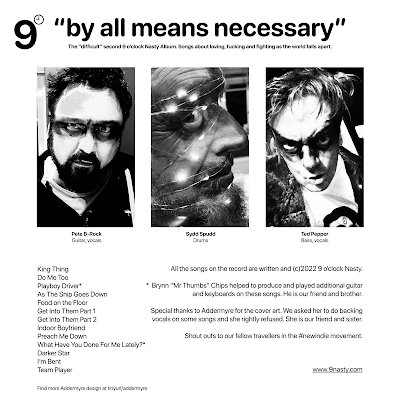 By All Means Necessary is our work from December 2021 to July 2022. There are some songs we haven't included from the summer of 2022 which are collaborations. It charts to switch from mucking about to kicking the door a bit. The best place to listen to it is Bandcamp, but all the usual places have it too.
This is what our friend and enemy Danzig Krupp had to say about it for the sleeve notes.

They asked me to write this, so I have. I sit in a bed, in a clinical room with the machines and the pale green hard wall, and they visit. They eat cheese, they read me newspapers and they play me music. Sometimes theirs, sometimes other people’s. We talk about music. We talk about their music. Thanks to them I have found new bands to adore: to persuade this cynical broken old punk that there is a future for new music and bands worth listening to. The Qwarks. Margaret Hooligans. Molosser. I Am the Unicorn Head. Arch Femmesis. Golden Plates. Everything But The Everything. Bones in Butter. Avresa. More. So many.

But what about 9 o’clock Nasty?

At the start of this awful year, they were at a low point. They had blasted the world with 16 songs in the shape of a number of EPs and an album. It was a mix of every style and every idea that could pull into shape. There were flashes of brilliance. Lots of them. But there was no cohesion. They finished with a cover version, Sexy Back. At the time I thought it was unforgivable and I said so, but with hindsight it was a turning point. There is a moment near the end when the song twists and tightens. Over the droning, ironic whisper of a man old enough to know better trying to entice, the guitar hits a level of intensity, of fearless repetition, that it lifts out of the world of small-time, unknown band from Leicester and into the shape of something special. It showed the way.

We talked a lot about what they should do, and the journey began to refine and build rather than scatter glitter to the four winds. Each song showed learning and progression from the one before.

King Thing hits a swagger and a level of cool I never thought could come from my beloved Leicester. A song with a message and a song with intent.

They kept coming like a factory, Do Me Too with it’s mixed messages on sexuality and driving bass. Playboy Driver with full-on glam-attack. Darker Star screaming for revenge to heaven. I’m Bent banging the walls and demanding attention. Then that razor, that ice pick, that boot in the face of Team Player.

I have changed the order of release to make my point, because I know that Team Player is not the garage song they were fighting to make. Team Player is the start of the next journey. I hope I can travel with them to see it. But in the process of getting there, they have made a body of work I can say, with some objectivity, makes sense. Yes there are moments of whimsy still. But that is part of their DNA, and it is the danger of crashing into feedback-driven chaos, or swerving into a drunken party-song, that makes that headlong dash so exciting. Hold tight.

Enjoy. Play these songs loud and for god’s sakes sing along. They are made to have one more voice added. Yours.