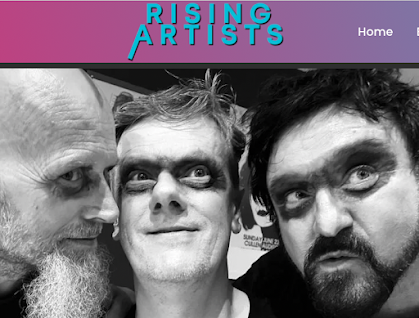 Jaye at Rising Stars kindly posted a review of Growl this weekend.

Reviews are brilliant as they involve all the pleasure of talking about yourself with none of the effort, and this one is lovely.

9 o’clock Nasty….A name as unique as their music. The three piece group from Leicester, UK have been taking advantage of their ability to work hard, showcasing on the fact that they can release three EPs in three months. “Growl”, their most recent release, has three songs with a very eclectic taste, they are definitely extending the musical boundaries.

Three in three? Hold My Beer! We have two more months with EPs (Dust, and Cut) our first album and about six other songs that will be out this side of the Pagan Yule Celebrations. One of the joys of living above a studio (even if it is the world's smallest one) is the ability to kick out a constant stream of gems.

“Who the hell is Monstruosa?"

That indeed is a good question.

The honest answer is that Monstruosa is Enos, the cheese plant that co-habits with the mixing desk and kicks out oxygen whilst seemingly eating flies.  Apparently they are properly called "Monstera Deliciosa" but Ted misread it and called the song Monstruosa by mistake. Alternatively it is the beautiful yet terrifying embodiment of death, welcomes at the end of a long and happy life when your time has finally come and you accept it with relief and a little joy.

“Big Fish (In a Pool of Piss)”. This joyous tune reminds you that it’s always important to be on top because one day you may just end up in a shitty pool. If you’re going to be in the shit you might as well be on top.

This is our favourite review of Big Fish so far.