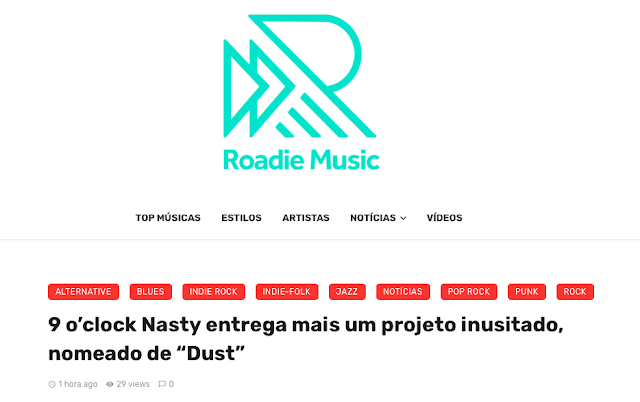 Roadie Music are one of the sites with big readership that have written about the band, in fact our website stats really bounce up whenever they publish something. This article is both kind and perceptive. As always please do have a look on their site, but as it's in Portuguese we reproduce some translated bits here (apologies for Ted's awful translation skills).

Once again, 9 o’clock Nasty arrives with new unique productions. With genuine characteristics, differentiated voice productions, the band presents “Dust”. A single officially released on September 4, 2021, the collection features 3 tracks, totalling 8 minutes of music. Check out the result of the work:

The single is simply a set of songs that will add to the group's curriculum, songs that mix some types of genres, such as pop rock, some elements of blues and funky. The main feature that draws attention to the productions is the way they treat the voices, always putting one in each ear, playing with the perceptions connected with the other instruments. Without many effects, the 9 o’clock Nasty sound is pretty straightforward, with percussion lines often similar to songs in the pop punk genre.

We're aiming for simple and sometimes we miss and make it complex! As we've got the hang of this disaster of a studio and rediscover the joy of analogue tape and razor blades layering vocals is probably the part of the production process that is the most fun: the bones of the song are done, the parts that will go wrong already have, and you're adding the soul to the song.

The band decided to bet on a differential for the single. The last track, “Last Chance”, presents a story that involves a supposed love tale, in which the ending can be a separation. Also, it's a song the artists unraveled with more patience, more dramatic features and calmer guitar lines.

The origin of the song was actually a cat looking at Ted one night with that "look I know we split up but I will give you one last chance to fuss me and feed me and take me back" face. Hence all the cats in the video. We think cats, if they could send texts, would probably text things that looked a lot like our lyrics.

The group is increasingly gaining ground in the music scene, and their works can be found in several playlists distributed by streaming platforms. The songs on “Dust” already occupy some positions among the top 5 favorites by fans. If you enjoyed the band's work, I recommend that you follow them to always stay on top of the news. In fact, there are already new projects published.

Sincere thanks to Roadie Music, it is a real buzz to be on the same site as so many other great acts, we hope to get to play in Brazil one day.