Rock Era Mag: We slither and we are notorious and we love this review! Heartland Rock with Everyday Energy 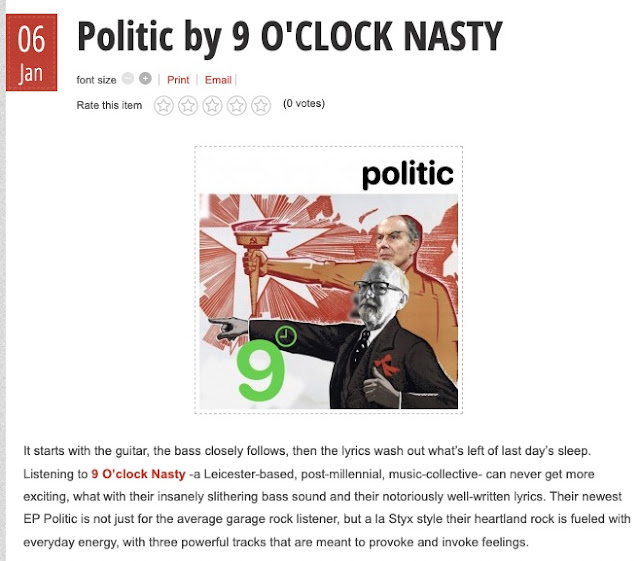 We haven't had any dealings with Rock Era Magazine before - they are Egyptian and they tend to cover music that is a little more on the metal end of the spectrum, at least as far as we can tell. Politic is getting so many more plays than our previous EPs on launch weekend and we are so proud of it, but even so, the validation of comments from someone else still feel so good.

We won't copy and paste the review, PLEASE give it a click and read it, traffic helps blogs and fanzines.

"...with their insanely slithering bass sound and their notoriously well-written lyrics."

Ted played bass and wrote the words for King Thing so he is now in his happy place, putting on a new layer of makeup over last night's and eating doughnut after doughnut. He will eventually snap and go and chase cars, but for now he is content beyond words.

It is intended to be a fair and square political record, without telling anyone how to vote. To be clear, when we say "Fuck Them Up" we don't mean in the old 'throw a brick through their window' sense - we mean live with kindness, tolerance and VOTE and ensure all your peers VOTE too. Green Day wrote the songs referred to in an infinitely kinder and less dangerous world than the one we're living in now.  Pussies.

Everything is political. Well except that thing. The thing you just thought of.

"The music is fresh, the sound is unlike any other and with a song like “Get Into Them Part II” on the playlist, this band is destined for bigger wonders not too far ahead."

We're not fussed about wonders as long as we can go on flying the freak flag - it is true though that, much like "As the Ship Goes Down" on Party, or indeed our version of Sexy Back, sometimes things just land with a big fat inspirational thud. That's Art. And there is nothing more political than Art. Except bricks through windows.