Reviews for Rise Up 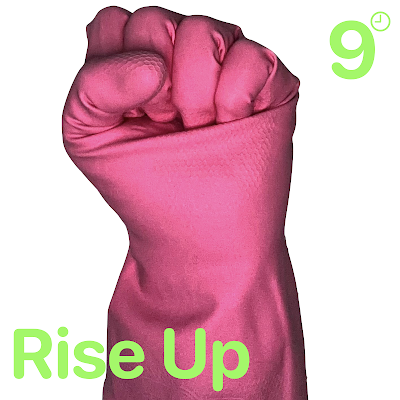 Less Than 1000 Followers @jpgchief "Are the Nasty going romantic? Has fame gone over the raccoons’ heads? I don’t think so, but this song is definitely a huge turn away from their previous releases. Disclaimer, this song is NOT a Christmas song, but I think it most definitely should be….“Rise Up” is a clean (??) and almost ACOUSTIC (?!) track by the raccoons. I mean, after all I’ve heard from them, clean and acoustic were never words I thought I’d use. But life acts in mysterious ways, and so does the now self-proclaimed British boy band… Goddamn, I love these guys."

Edgar Allan Poets @edgarallanpoets "They snuck into our lives with an irreverent and fun alternative punk: they won us over with songs like Sleepy Policeman, Playboy driver and many others and today they throw off the mask and we finally understand 9 o’clock Nasty’s mission. I imagine them wearing black berets, smoking a cigar with Fidel Castro and Ernesto Che Guevara as they talk about the Revolution. I see them passionately discussing how to wake up the sleeping masses… I support their ideas and I truly believe that people should start waking up. Governments are muzzling us: but we are not good dogs and we have to start biting."

@SendMeYourEars “9 o’clock Nasty have an unnerving ability to reinvent themselves between singles. Are they the Madonna of the 2020s? We’ve likened previous singles to Pink Floyd, pop-punk, garage, and unapologetically loud, brash and shouty. More than any other band, 9 o’clock Nasty have kept us on our toes this year . The layered vocals in the choruses give this track a definite call to action feel and there’s something very stirring about their presence. “Rise Up, Rise Up”. This is not a song to sit still to. The familiarity of the call-to-action choruses gives the listener the confidence to join in. The song has a Lumineers (Ho Hey) feel to it. This is a song you’ll be singing to yourself for days after listening. Whether you want to or not! Rise Up is a sonic earworm. A track that gets under your skin and one which we have no doubt we’ll be thinking about for a very long time.”

@sinusoidal.music “9 o’clock Nasty have never needed a reason to search for a new sound. Unlike Schrödinger’s cat, they have a problem being kept in a box. If you’ve defined their music to be chaotic rock with surprising pop elements, try to relearn what their sound is like now. This is their latest single, Rise Up. You really wouldn’t take them to be the band that writes anthems. I guess they top your list now. With a two chord change, they make a simple, touching song. The “rise up” part is the one you sing, inadvertently. It is a fun song, and they pay particular attention to the sound here. It is necessary, knowing that it is sparse in terms of layers, unlike their other productions. Sweet frills and guitar licks pepper the song, just to keep it fresh. It is a welcome change, if you were chalking to be that “weird raccoon imitating sound smugglers”. A sentence as unique as their style and approach to sound. Sydd, Ted and Pete are rallying for the bands across the land to come together. With just their persona in review, I’d go along for the ride alone.”

@musicistoblame “The “nasty” have gone romantic with this new track, it’s clean and even acoustic, something to play at a family dinner or around a campfire. This simple and touching new song has a very anthemic feel, telling the listeners to come together and not let the world get them down. This is a 180 transformation from their debut EP ‘Catch Nasty’. ‘Rise Up’ is a fun song with nice little riffs, vocal harmonies, a solid drum beat, and a clean presence. Overall, it’s sweet and a very interesting addition to their music, perhaps a refreshing change from their previous work.”

@thoughtswordsaction “Leicester-based trio 9 o’Clock Nasty is probably one of the best well-hidden indie rock gems. These prolific musicians somehow managed to release a mindblowing number of singles, one extended play release, and even a full-length album in less than two years. Their tireless working ethic could serve as an example to many indie bands out there, and the best part about everything is that each piece of their work sounds divine. Take their latest single as an example. Rise Up is a minimalistic indie rock composition that carries delicate ear-appealing harmonies and singalongs, catchy chord progressions, and uplifting rhythmic sequences. It’s a calm, cheerful, beautiful ballad about resistance. A song that protests against forcefully imposed modern social norms, conformism, and capitalist society.”\

@mangowavereviews Sydd, Pete and Tedd have done it again. Once more, the Leicester-based trio has provided us with the song we did not know we needed. Pursuing new avenues by adding Protest Folk to their New Indie inventory, they keep things exciting. And of course, ‚Rise Up‘ is not necessarily a Christmas Song – it just fits very well. It is hence a hence a catchy musical reminder that redistribution of wealth needs to be done by hand – in the UK, in the EU, in Iran, and everywhere else.

@musicforallmag “With the appearance of a simple song, “Rise Up” is very rich in arrangements, with details on the keyboards and guitar arpeggios, in addition to the soft vocal lines in the versions and with the chorus in the choruses. “Rise Up” has a theme based on resistance to the paths that the world has taken, taking inspiration from current times, where capitalism prevails in end-of-year shopping, while many people are in need. Of course, the lyrics provide for other interpretations, but all with a texture of protest and musical lightness.”

@findnoenemy “9 o’clock Nasty’s “Rise Up” is a blast of resistance in a sea of complacency. This love-pop-power-ballad is a call to arms, a rallying cry for the disenfranchised masses. With soaring melodies and driving beats, 9 o’clock Nasty proves that they are the most dangerous boy band on the planet. Of course, their continual shows of such outlandish and eccentric fun across every release doesn’t fail to let up. They seem to revel in taking you down different paths, constantly exciting the listener again and again each time.”

@lostinthemanor. “As the festive season approaches, it is time for the most dangerous boy band on the planet to rise from their slumber and let rip. 9 o’clock Nasty unleash Rise Up. A ballad of resistance. A love song to revolution.”

@music_arenagh Rise up is addictive and power charged, this is not a song you listen to and skip, after listening for the first time you are sure to put it on repeat. The song was inspired by real-life situations, which makes the song relatable and easy to fall in love with.

Email ThisBlogThis!Share to TwitterShare to FacebookShare to Pinterest
Labels: Reviews, Rise Up