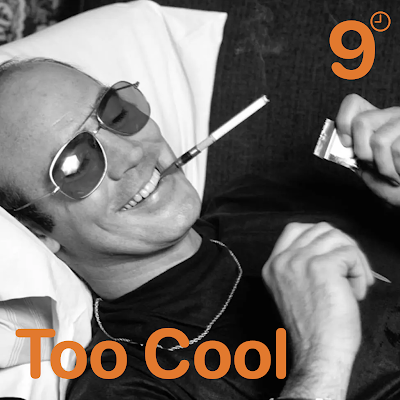 @RockEraMag "The band pushes the boundaries with a total banger bringing the spirit of rock to the listener’s ears with sprinkles of punk all over it. While the song takes on a sarcastic lyrical theme, it was definitely fascinating how the song starts off with a literal drum roll to introduce the catchy guitar riff that backbones the whole song. The drum line in the song is groovy with fills marking every transition in the song. In addition the bass line is simple and melodic, maintaining a rhythm and keeping the listener interested. The verses are driven by a shouting duet from Pete and Ted fuelling the energetic vibe of the song, while the chorus takes a sing-along approach with a full-on punk rock groove. Before the last chorus Pete takes the spotlight with a melodic guitar solo derived from the main riff."

#SkylightWebzine "The song begins with a catchy Funk Rock guitar riff reminiscent of the Red Hot Chili Peppers; however, the later revealed influences are more than just Funky music. The double vocals blend into the stereo field and deliver an old school Rap attitude (check out Ice T and Beastie Boys) which brings back memories of the “(You Gotta) Fight for Your Right (To Party!)” song. ….. In general, although this song confused me in the beginning, now the more I listen to it, the more I find interesting and smart music that impresses me. I hope that you will have the opportunity to check for yourselves!"

@mangowavereviews “A motivating drumroll opens the track and immediately the funky New Indie guitar lick invades your ears, tickles your synapses and tells you butt and legs that its time for some cool moves now. And as the first vocal line „He’s the Low Fat Jesus, the Indie King“ drops in, die-hard 9 o’clock nasty fans will have realized that something is different here. It is neither the energy nor the sound. In fact, the guitar lick that frolics through the verses like a breakdancing polar bear reminds of the main riff in ‚Food on the Floor‚. What is different in ‚Too Cool‘ is yet about the sound, and it is the production of the song. ‚Too Cool‘ is the first collaboration between 9 o’clock nasty and producer Hugo GT from Québec. And as much as this person may be a monster, he is a beast when it comes to producing fat and cool sounds, and this song proves it.”

@jpgchief “Man, every time I think I’ve figured out the Nasty they always return with more and more ways to surprise me. “Oh, no you don’t”, they say to me with every new single. So what’s next? More gritty garage rock tracks with sexual innuendoes? Perverted hymns of unholy sacraments? Well, I’ll tell you, their next track is, once again, their best track yet. “Too Cool” is a celebration of infamy in a libertine paradise of glorious hedonism. Too cool to die, too cool to live. A Rock and Roll track with a beat to die for with a raw, uninhibited groove created by maniacs.”

@KARLISMYUNKLE “What we love about 9 o’clock Nasty is their unparalleled ability to create social commentary through their lens of wisdom and experience, and Too Cool is no exception! Setting the tone with rolling drums and a classic rock guitar melody, we are immediately drawn into the opus.

The band sing evocatively, “He’s the low fat Jesus, the indie king, he’s too cool for school and all the childish things…” as the paint a picture with their words, not dissimilar to the concept of their single, Team Player…. We are forever fans of 9 o’clock Nasty and constantly impressed by their dedication and output – a band that knows themselves well and the themes they sing about – raw, and authentic talent.”

@sendmeyourears “There is a quiet confidence in their music: a brash and confident strut which makes you love them as humans, whether you like their music or not. True art is about how it makes you feel, and 9 o’clock Nasty never fail to make us feel something…. Everything about the track is catchy as hell. If we didn’t have more reviews to do, this would likely be on repeat for the day.”

@phantom_power_music_blog “Funk, Punk and Rock.  Go ahead, make your comparisons to Cake, RHCP and even the Buzzcocks - you’d be on point.  Listen to the dryness of the mix, the guitar tones, and the way the bass line slithers between the kick and the guitar.  Great jam.  Pay attention to the guitar tones here, because they are just going to keep building and building.  We’re off to a great starting point - and I love the fact that the whole intro is odd.  1 bar of snare, 8 bars of riff, and 2 bars of snare.  You would expect an even set of numbers for the entire passage - way cool.  …Nice work boys - great funky punk anthem you’ve got here - hope to see you play it live someday!”

@sinusoidal.music “Too Cool uses a cool, unique riff to kick open the plastic doors and the velvet ropes that block your way to suave city. The snare strafe that opens the song is a caffeine kick in itself, then comes the coolest groove that side of the world. …Tell me one other band on Earth that will give you imagery like that. Don’t even bother searching. It is an electrifying, riff based rock song that scratches that itch and itches that scratch. 9 o’clock Nasty had songs to hold, keep, and close the party. Now they have one to start it off.”

@itsallindie “"Too Cool" carries on with their infectious sound as you can hear almost as soon as you smash play on the track. The single almost feels like they've transformed into a band that is literally on the cusp of a UK-wide tour, we've got funky guitar tones which you would expect to hear in a Red Hot Chilli Peppers song but they've kept that punk-edge that has got them where they are today.”

@york_calling “Opening with a drum roll, the track quickly hits a bluesy groove. Attitude-filled vocals join in and, without realising it, you’re moving along. Its tongue-in-cheek lyrics take no prisoners while bringing a smile to your face. With elements of classic rock and modern lyrical themes, there’s nothing not to like about Too Cool.”

@fromthestrait “Aside from the fact that I can only assume getting a pint with this trio would result in an eventful and memorable time (and who wouldn’t be on board for that?!), I’m always excited to see a new release from them hit my inbox. “Too Cool” is another gem in their discography, with edgy vocals, infectious guitar riffs, and a nostalgic aspect to the song that makes it feel familiar but completely different.”

@findnoenemy “Ever the provocateurs, ever the torchbearers of something more exciting, and consistently unwavering in their madness, 9 o’clock Nasty don’t spare the punches or disappoint in the slightest with their latest frenzy on ‘Too Cool’. With perhaps the most clean production I’ve heard yet, ‘Too Cool’ departs from the more rough around the edges soundscapes I’ve come to expect. It feels polished, but more visceral, addictive, and engaging. An absolute banger, from back to front. Too cool for school can’t stop replaying in your head.”

@edgarallanpoets “The perfect soundtrack to a robbery”

@indiemusicflix “There is no telling what they can do, and their past is no lesson to derive a sensible future. Manic, creative and sounding absolutely original, they have left a series of songs in their wake. Here, they welcome you to the Dapper & Debonair Academy with their track Too Cool. Certain entrances demand a head turning standing”ovation. The riff that 9 o’clock Nasty open this track with is precisely designed that way.”

@havoc_underground “Ripping guitar arpeggios pull you into this track as you're then thrown into a wild ride full of poppy vocal flows, unique transitions, and solid production work. This is a really dynamic release, and it'll leave you wanting to smash the replay button to experience the journey again once it's over.”

@danzigkrupp “A tight drumroll followed by three minutes of full-on attack. By the end I was begging it to stop but I had to play it again and again. It made me. There is a sickness at the heart of this song that pushes me to the edge. But it’s a catchy bastard. A trickster. Send help.”

Drums, electric guitars, and voices full of energy, the entry into the running of the title of the Boys Band will certainly penetrate you in a thunderous way. The sound is full of good positive vibes that are sure to give you punch all day long. Have no restraint in putting it as your alarm clock. What's better than being cool every day?”

@theothersidereviews “I love to taste more of their music, and they never let me down. Ending 2022 with their track ‘Rise Up’, ‘Too Cool’ shakes you awake rubbing that sleep from the corner of your eye. The thing is, while the UK-based trio could be thrust into the “punk meets grunge” genre, ‘Too Cool’ is a fusion of their old-school punk tinged with elements of vintage rock ‘n’ roll. Interestingly enough, while a dark, rock flow exists in the melody, the pounding drums and bold guitars send your heart soaring with their obscure distortion.”

@risingartists.musicblog “By the end, you’re left feeling either energized or cathartic, depending on how you digest your music. Regardless, this track is a fantastic example of how unique modern rock can be. Give Nine O’clock Nasty a listen and a follow!”

@thebuzzr “A STRIPPED DOWN SNARL. RAW FLESH, PULSING BLOOD WITH A BEAT TO KILL FOR.”

@thewildiscalling “The 9 o’clock Nasty are back and you know what time it is.  These boys are Too Cool to fool around. They’re ready to slap-ya-in-the-face with this jiving jam.  The UK rock and roll pranksters have hit their stride, penning dare we say their best song yet.  Too Cool instantly recalls the infectious punk hip hop appeal of Beastie Boys with a taste of “before they sucked” era Red Hot Chili Peppers.  Funky and not taking themselves too seriously, it hits.  Try to deny yourself, you can’t.”

@themetalpriestess “This is a raw, riff-based track full of groove, energy and is a funky punk anthem that more people should have the pleasure of listening to as it is so infectious (six times on repeat and wanted to listen to it a further six!). Go check it out!. Can I listen to it again yet???!”

@senocular_media “Rugged riffs and raspy vocals deliver a raucous tone and angsty frame of mind reminiscent of early Beatie Boys. 9 o’clock Nasty’s latest single, “Too Cool,” is a raw indie rock anthem and the perfect addition to any rock playlist. “

Email ThisBlogThis!Share to TwitterShare to FacebookShare to Pinterest
Labels: Reviews, Too Cool