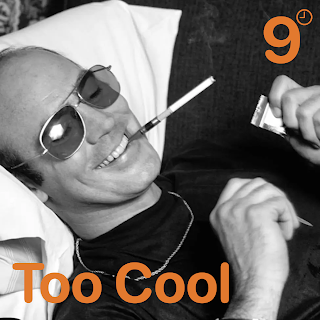 The first 9 o'clock Nasty release of 2023 is TOO COOL. Please give it a pre-save.

Too Cool started in the summer as this majestic fusion of a Dandy Warhols style guitar riff and a bizarre Fall-esque vocal delivery. The component parts were great but the result was an angular blob. We were busy with the upcoming gig and other songs that were screaming for attention so it was set aside to fester. Like the mould on yoghurt. Like the resentment in a long but flawed relationship. Each session we would go back to it and ponder. Sometimes we'd add a bit. Then we'd add a bit more. Too Cool accumulated layers of ugly than a candidate for a safe seat in Surrey.

Then one day as we finished prepping the daytime studio, Studio 9, we decided to give Too Cool another go. The original vocal was mostly deleted and replaced with a two-parter that bedded into the song better. The guitar chords layered and shone. We pronounced ourselves satisfied.

But the story ends not there. A wicked troll on the internet called Hugo sent us an email. Hugo is from Quebec and therefore immediately seemed exotic and somehow alluring to us. He is a music producer. Give me your song he said, that I might make a thing of pure beauty. Oh and we believed him. We were seduced. He took our song and he cut off its graceful legs. He broke its delicate filigree fingers. He did the work of a true monster of rock. Hugo serves the guitar gods. He is obsessive and he is dangerous. We had met our match. He refined and reduced the song to a sharp point.

When we heard the remix we wept. We rubbed our hands and we called out. But we could not deny that he had taken a thing of beauty and imbued it with a raw, feral power that had to be unleashed.

And so Too Cool comes to you, from the dark heart of Leicester with the evil glee of cosmopolitan North America. It is unlike anything we have made before and we think it is a fitting song to commence what will be a long and painful year.

2023 will not be pretty. There is so much unsettled business in the world. So much shit that needs to be shovelled. Too Cool is the song to play as we commence work.

Take. No. Fucking. Prisoners. Nasty, out.

Email ThisBlogThis!Share to TwitterShare to FacebookShare to Pinterest
Labels: Too Cool