Friend of the Nasties in Pie Trouble 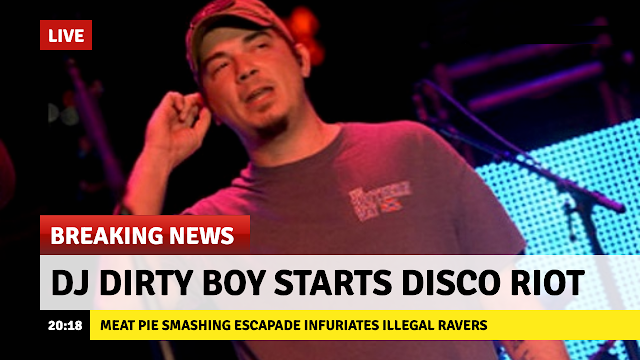 Long-standing collaborator of the 9 o'clock Nasty, DJ "Dirty Boy" has hit that classic roadblock: Art Versus Order. Despite the local media reports, although the event was in fact illegal, he was simply passing through and found himself at the decks with a carrier bag containing two hot Pukka Pies.

Onlookers report that trouble broke out when DJ Dirty Boy loaded one pie onto each deck and at the climactic moment of his set brought both his hands smashing down, offloading meat and pastry fragments in most directions.

And incidentally burning both palms.

People who did not understand his performance got upset and trouble ensued. The owner of the decks, the people in the front row and Dirty's ex partner who dumped him after the event, are all taking legal action.

We stand behind all the Nasty. Dirty Boy has started a crowdfunding campaign to make good on the various legal expenses incurred and to replace his clothing. Give our homeboy all the support you can.

Happy to donate a cock and hen to a good cause. I too have suffered hot meat burns, although under very different circumstances.