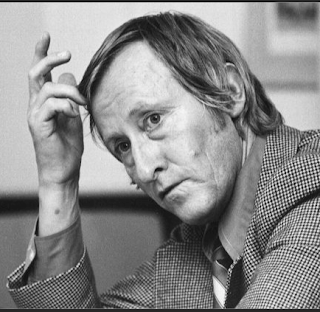 Herr Krupp continues to be the most dangerous man in Western music. He has relaunched Dark Strudel from his new UK address with no social media and no promotion and yet we understand has had hundreds of readers every day.

We adored him the moment we met him in a roadside bar before our debut gig in Bavaria, the pine needle crispy underfoot. He seemed like a genius that had lost his way, but we admit to a certain annoyance that our secret friend has begun to once more spread his words without showering us with his undivided attention.

Anyway, we did persuade him (pay him, the price of a review was a pizza without guarantees he would like it, his negative reviews are as cruel as they are impenetrable) to listen to some of our new stuff and he picked a side-project to write about.

We did Terror Couple Kill Colonel, the Bauhaus song, a couple of weeks ago for shits and giggles. It is a good song and we wanted to put our own imprint on it. We didn't include it on an EP but made it available on YouTube and have had some lovely messages from people of the Goth persuasion over the internet since. We may do a covers record soon and it would fit well on that.

Either that or we'll put our own words to it....

Anyhoo, Danzig was both kind and comprehensible in his review.

"A song about sex and death that sounds exactly that. The result is a triumph."

Must admit, we hadn't thought of it in quite that way until we read the words but it is sort of.... wriggly and it is definitely about a fascination with death. Triumph is not the kind of word we have thrown at us, so we will put it in a frame and feed it sweet nectar.

"The bass plays the same notes but executes them with fearless precision in a new structure that shakes the soul. The lyrics are whispered in a lover's ear to playfully terrify them in the dark of the night. The guitar teases and beguiles with that curious psychedelic-jazz mix that 9 o'clock Nasty have deployed so successfully in their first three EPs."

I am really not sure how Pete Brock will react to his guitar playing being described as "jazz" but it's fine praise.

Have a listen, the only available copy on the internet is the YouTube one above. If you're a Bauhaus fan let us know what you think. Did we do justice?