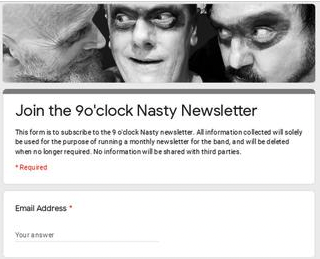 We're happy to announce that the free mp3 for September will be an extended dance mix of Gammon v Pilgrim produced by none other than DJ Nasty himself. The song is painfully relevant now as the GammonSphere coils itself up to fury over the idea of innocent people fleeing for their lives might need help. Still suppose articles raising fear of immigrants gets clicks, and clicks means cash.

So anyway, the remix is awesome. We probably won't make it available in other ways for a good long time with all the other stuff we have ready to release. So to get it, free, you just need to sign up for our newsletter.

You may have questions. Hopefully the ones we have answered below.

Won't you spam us out of existence once you have our details?

No. We will only publish one newsletter a month to the subscribers. It is about a page of text and links to stuff. Mostly it is information about what we are up to and entertainment. There genuinely is material we do not put out anywhere else.
Do we get discounts on stuff?
Thank you for asking. Not at the moment. When our debut album "Catch Nasty" is released, the physical CD version will be very limited edition. Subscribers will get first dibs on ordering.
But is my data safe?
Neat question. We're not convinced that much data is safe, but that is a whole other story. In terms of what we collect and store, we only hold the email address of the subscriber, nothing else. We will not use it for anything else or share it with anyone else. That is an unconditional promise. One email a month related to 9 o'clock Nasty stuff, no more, no less.
Why? Aren't newsletters super-old fashioned?
We're on all the social media we can be bothered with. Facebook, IGTV, Insta, TikTok, Twitter. We draw the line at LinkedIn. They are all good vehicles for interacting with people and getting found. but they are also capricious and nervous things. People get banned from them for sometimes quite flimsy reasons and it does seem that if you rely on them, you will eventually get fucked over. So..... we wanted a newsletter as an alternative way to reach people that like what we do that is less under the control of the corporate monsters. Also, a newsletter allows us to share things that don't work in social media and doing it once a month means it isn't a total pain the buttocks.
But all your songs are free to download, what's the deal with the "free one" for members?
We will charge for physical media, because they cost us money to make. We're happy to make mp3s available because not everyone likes to use the streaming services. But we have a metric shit ton of material we haven't put out yet. Sorry that would be a tonne if it is metric. Once a month it is nice to share one of the things we aren't ready to put out for a while to people that will enjoy it. Past releases have included Say No To Funk, which is our next single, and Terror Couple Kill Colonel, the Bauhaus song, that is not on any of the streaming services.
If you have more questions then join the mailing list and then you'll get our super-secret email address and you can ask more!
at August 29, 2021

Email ThisBlogThis!Share to TwitterShare to FacebookShare to Pinterest
Labels: Newsletter