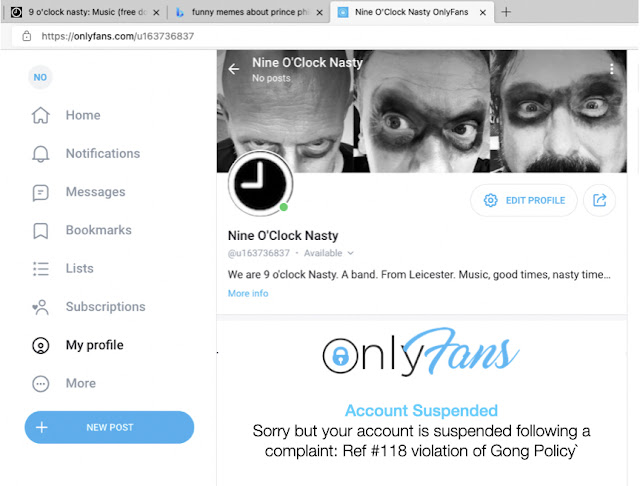 9 o'clock Nasty and their prodigious fanbase were in turmoil last night after the shock decision by OnlyFans to suspend the band's newly created account on some made up nonsense.

Donna McDonna, ace attorney of the Ding Patriarchy, fresh from springing DJ Dirty Boy from the arms of the law, is now on the case, vowing the blaze a trail of mortal legal terror across the heartland of the internet.

OnlyFans, a service that allows artists to monetise content to their public, took the action unilaterally, following a complaint regarding the use of Gongs in the first of three 'highly sexualised' music videos that were made available for £5.99 each on the platform by the 9 o'clocks. It seems the consistent use of Gongs is in breach of rule 118 of the ghoulish money making jamsite.

The section gaining the greatest controversy, featuring Ted Pepper applying Kohl Eye-Shadow from the surface of the brass percussion whang unsettled early viewers and the pink-bits reseller simply had to act.

Spoke-singer Pete Brock commented in a harmony of three parts

We understand the requirement (requireeement) (reeeeequireeement) for the platform to ensure its highly arbitrary (arbitrareeee) (arbitrareeee) content moderation (ion) (ION) (eeeeeeON) policies are rigidly and capriciously applied, but we ask for a totally baseless exception to be (made, MADE, MAAAYYYDDE). I have (hav) (AV) a series of artful nudes photographed from a drone over Bradgate Park ready for release (ease) (EASE) (eeeeese) and they'll get stale.

OnlyFans were not approached to comment on this article.