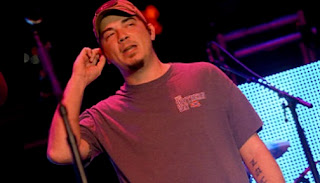 We're sorry to announce that our long-time collaborator, sometimes producer and all-times landlord, DJ Dirty Boy has been taken into custody following a bizarre and confrontational court appearance.

Dirty Boy is a tortured soul and had a very difficult time with lockdown, recently trying to reboot his career through pirate radio and a residency in a local club.  We all thought he was turning his life around, and the evidence of the interview with him on fan-site Dark Strudel and in his remix of Gammon v Pilgrim for us convinced us that he was serious about change.

It is hard to watch someone you love fall to pieces. But it is also compelling.

DJDB was difficult in court, having refused legal representation and avoided having friends attend to lend support. All we know is the story from the Leicester Mercury which describes a bust-up before the hearing even began that led to deep shit becoming bottomless.

We have spoken to him and are helping him settle his affairs. He has promised to write a prison diary that we may publish parts of here. If they have a radio station in the prison he eventually ends up staying at then it will not know what hit it. For the moment we do not know where he will be kept long-term.

Dirty Boy, we salute you. We hope your hands get better and your head gets straight.