"It’s not a bad punch in the face": The Other Side reviews "Growl" 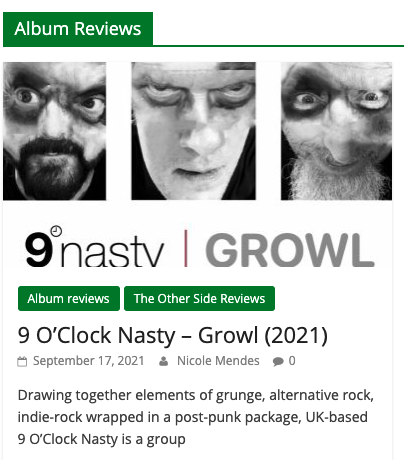 Seriously, listening to ‘Monstruosa’ is like being punched in the face after drinking several tequila shots. It’s not a bad punch in the face, just a rather unexpected and overwhelming one.

The Other Side have just posted a review of "Growl" which we put out in the hot days of August: It seems ago in NastyTime but it's really cool that word is getting out. Strangely just before reading the review Ted was trying to work out (using an abacus, slide rule, graph paper and a strong drink) how one of the songs off the EP "Walkman Walk" had got the most plays in an hour that we've ever had on Instagram. Anyone who looks up how to succeed in Social Media.... Ted is unable to offer any insight on the subject and is perplexed.

Do go to their site and have a look - music blogs need traffic and if you like their work make a Ko-Fi donation.

The review compares us to two bands we honestly make no effort to mimic, indeed ones we would make an effort not to get close to - the Sex Pistols and Joy Division. But in truth, they aren't bad acts to get mentioned in the same sentence as (and Ted is relieved that so far the only comparison to the Fall the band have had* was by a man on a train who turned out to be the reincarnation of Mark E Smith**).

Nicole describes Walkman Walk as being a bridge between the headbanging lunacy of Monstruosa (which we think is one of the best intros ever) and the groovy stupids of Big Fish. She is absolutely right. Until now our plan has been to have an "A Side" a "Goth Jazz Dance Song" and a "B Side" on every release, and Walkman was firmly in our B-side category. We like her description better and will use it mercilessly from now on! That said, the next EP "Cut" has three honest to goodness A sides.

That reminds me, must design the artwork for those..... 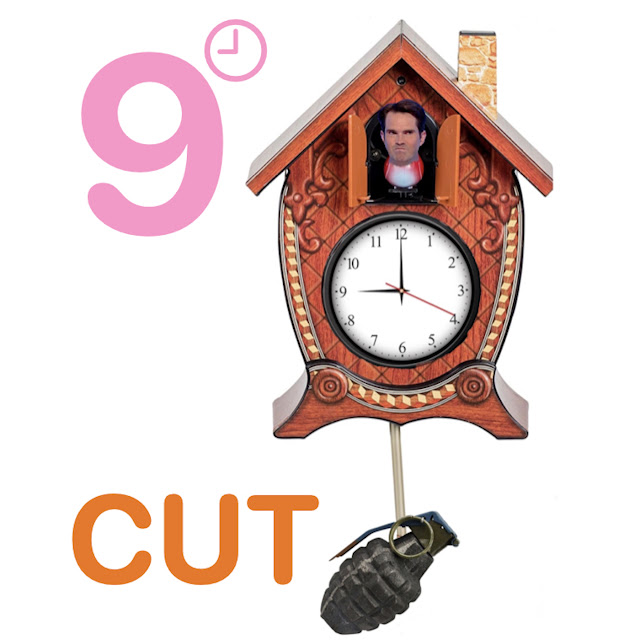 You would never believe how hard it is to find an image of a Jimmy Carr cuckoo clock with the face saying 9 o'clock, even on the internet. We're quite niche I guess.

I have to admit that I like everything about Growl. Anthemic and hypnotic, it reverberates down your spine and ends off leaving you with cold shivers…good shivers. I can’t wait for more from 9 O’Clock Nasty.

That's really kind, but she doesn't have to wait as "Dust" is out already, "Cut" is out in two or three weeks and an LP is almost finished!

* This is in relation to the constant comparisons to the Fall that one of Ted's earlier projects, the Brand New Executives had. As, at the time, Ted has a slightly Manc accent (it was travelling from Liverpool to Leicester down the A6 and was pausing for scones in the Greater Manchester area), it was a lazy comparison. Indeed it was only when the Brand New Executives did a Sunday lunch gig consisting entirely of Fall songs to a rather stunned Derbyshire pub's customers that the comparison was dropped.

** This is only partially true, Mark E Smith's reincarnation was on a National Express Bus***

*** This is even less true. There was a man on a train who looked totally like Mark E Smith, and Ted did play him 9 o'clock Nasty songs (on request, not as some kind of strange bullying on public transport) and the stranger did include the Fall, as well as the Pixies and Velvet Underground, and Massive Attack in the list of bands we sounded a bit like. He had a very soft home counties accent that totally ruined the effect. Danzig Krupp, who was on the train too, later interviewed reincarnated Mark E Smith and had his photo taken with him for a future feature on Dark Strudel.