MangoWave thinks Growl is Too Short but "Punk as Hell" 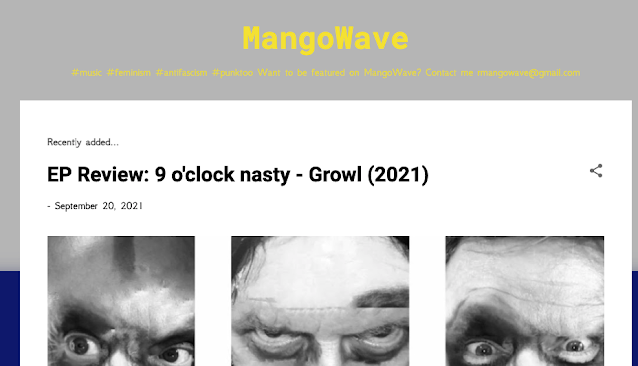 Newsflash. We have a pub-quiz team. I know you might think we have no life outside music but from time to time we allow ourselves a moment of leisure. Sydd was working hard on the Nasty Packs so Pete, Ted and G'Ourd May were coming a credible second in a hotly contested battle of wits when the signal for a 9 o'clock Nasty review hits Ted's phone. It is a Banshee Wail. A sonic smorgasbord. But we cannot check it until the end of the quiz because "phone's away, that's the rules."

Dizzy with our winnings we checked to find with delight that German site MangoWave has picked up on reviewing Growl and despite some controversial opinions liked the record. These sites are a big part of the indie artist eco-system, and engaging an audience with new music, indeed if you're reading this you probably first found us from a review like that: so please do follow the link and show the 'zine some love.

"artistic fusion of severity and humour, arts and punk, sanity and insanity"

I think we would argue that none of those things are different, but maybe we are made this way. Punk-Art-Rock, that's kind of our whole thing. We can't call ourselves Art-Rockers because Produkty have kind of got that sewn up, but it's a thing, and we're that thing. Apparently we are also Dadaist (and that is an acute observation there from Team Mango, because we are. Shock.)

"The nihilist soundscapes go from Art Rock to Garage Rock, from wavy Post Punk to Punk Rock and back. Gloomy atmosphere grinds on snotty riffs, melancholy turns into dadaism, and absurdity supports social critique. One might frown listening to this for the first time, but as soon as you begin to feel it, "Growl" becomes a party banger. This is punk as hell."

When we read Party Banger we leapt to our feet and hugged the winners of the quiz who were a bit alarmed about that. Our crochet-embroidery team are still busy with the other phrases we wanted putting up in our bathrooms, but Party Banger is going on the list.

This is a lovely review, we do have one point we take exception to, but let's stop there. Let's bask.

No we can't let it lie, we must grumble.

MangoWave point out the EP is only 6 minutes long and strictly speaking is more a single. We beg to differ,

According to our internet research, an EP is defined by how many songs, not length. So three songs is more than a single. Also, short songs is kind of our thing. For those that have been with us a while, you'll have read this so sorry for the repeat. If you like one of our songs, the days of getting up off your arse and moving the needle on the record are gone. You ask the machine to just repeat the fucker until you've had enough. Our LP has sixteen songs and is 35 minutes long. We price our stuff pretty reasonably, and of course most people get the mp3s free from this website or stream them, so it isn't a big deal. But we choose to call them EPs and we're sticking to our guns. That's Dadaist Punk Art Rock for you. Crazy as Hell. Incidentally the next EP is called Cut and has Dead Planet, Gravy Train and THX-1138 on it and is out in October. After that there is one called Party which may be retitled Party Banger.