Passion for Chasing Fumes: Sinusoidal Get Nasty with Party 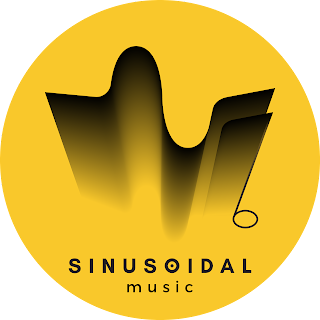 OK so we were in the Aldi. We shop. We dress as racoons, we go into the world. Ted is placed in the vegetable aisle, he feels safe there, Sydd prowls the beverage section, spots the bargains. samples the goods. Pete get in the meat products and strikes up conversation with the folk that pass to and fro, back and forth. The staff there are used the hulking presences. The stares. The heavy kohl. They know to turn off the music in case it upsets us.
"Hey, you're in 9 o'clock Nasty aren't you?"
It's a stupid question. Why else would Ted be wearing gold facepaint and his girlfriend's fur coat next to the courgettes? Ted does not like people that talk to him, he crabs sideways to the cheese. He is visiting Danzig later and needs supplies.
The friendly man, who used to be in a band himself in the 1990s and was quite a face on the Leicester scene persists with Sydd who is now camped at the Christmas specials.
"Your manager just posted a link to a good review about you on the band Facebook page. Have you seen it?"
It is a pretty fucking amazing write up, and it comes from Nishant Varma, the fourth most dangerous man in modern music. Sinusoidal rock our world. They had called us in the week and we had this strange late night phone-call interview with an echo and a slight lag between the words being spoken and the words being heard.
So it was that Ted and Pete were sat on their haunches in a huge mesh bin full of footballs while Sydd read the article to them. There are worse ways to spend a Saturday, although Ted had to apologise to all the children when Pete kept autographing their footballs with his Industrial Sharpie, the one he used to adapt the singer out of Bash to make him look more rock and roll.
We can't reproduce the article here. Well we could but fuck it, you should click and go read it. Look you've read this shit this far, so you must be interested on some level or other. Read it now, please.

You always know what to expect and get it wrong with 9 o’clock Nasty.

True say. Truth is the band have no idea whatsoever to expect so if you're watching and expecting to see and hear a particular thing you may be disappointed. If you like entropy, they're your boys.

Then the sick funk is in order, with a Les Claypool style bassline

This utterly foxed Ted, who was the author and performer of the bassline in question but Pete just slapped his back and congratulated him for being compared the the Claypool and blathered on about Primus. Ted, who stopped listening to music when Siouxsie sacked the Banshees is none the wiser.

You’re still going to get a special brew of Irish coffee with these guys. Beware for micro doses of LSD though, they’re perfectly capable.

That is a godamm lie, we have never drunk Irish Coffee or micro-dosed with LSD. We are entirely capable though. Nish, come visit and we will show you how we have a good time in Leicester on a wet Wednesday evening. It won't be pretty but you will end up with an incredible story to tell the grandchildren of strangers on the bus.