Mr Thumbs: The Fourth Wheel On Our Pram 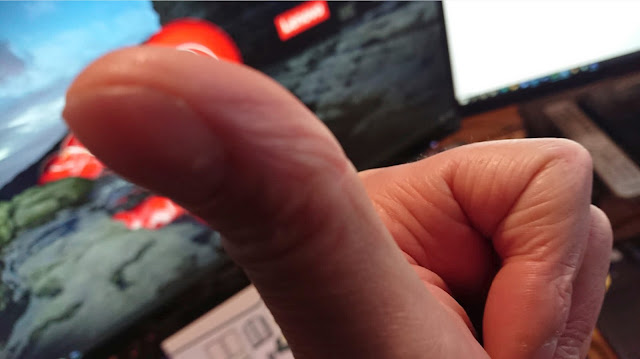 9 o'clock Nasty are a three-piece band. There is something about that compact, tight-knit group that just works.  But in the last few months we've begun to work with a few kindred spirits to allow us to keep the songs we produce fresh and bring some new talent to bear on our artwork.

Mr Thumbs, whose real name is Brynn Chipps (well that isn't his real name either, but that is what he is calling himself for the project) is working with us as a gun for hire guitarist and producer. Thumbs, a veteran of the Leicester music scene with a number of bands, some of stature, some of despair, met the band when Pete Brock broke into his studio to steal a wah wah pedal.

After a brief and uncomfortable legal process, Thumbs agreed to lay down some true scorching rock guitar for "What Have You Done For Me Lately?" which will be released on the next EP "Sex" on 12th February.

We were so happy with his work that we've now started using his as a consultant producer and fixer. If a song has gone into a creative cul-de-sac or needs a reworking, Thumbs is the man. For our May LP he's produced Hot Disco Shit! and Choke, and the April single, Playboy Driver has his massive thumb-prints all over it.

We hope that the great man will join us onstage at some point soon, watch this space for news of rehearsals.

So Brynn. Thumbs up. Welcome to the Nastyverse.

Email ThisBlogThis!Share to TwitterShare to FacebookShare to Pinterest
Labels: Thumbs