Food on the Floor Reviews 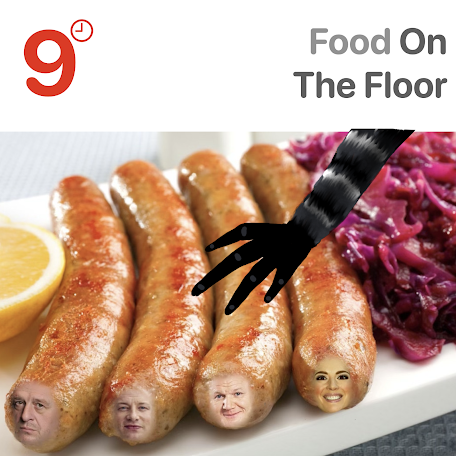 Top Music  "Their sound is reminiscent of early alt-rock bands like The Pixies, but with a more modern twist that makes them feel fresh. The band says that they always wanted to write short songs that are a musical punch in the face and that this is one of our best."

The Other Side Reviews @theothersidereviews "...have to admit that these lads are up there with My Chemical Romance and Radiohead when it comes to my playlists.... Gradually refining their sound and honing something eclectically awesome, 9 o’clock Nasty are true artists. Frenzied, bold and encapsulating the madness within all of us, the talented trio won my heart a long time ago and is yet to disappoint. ‘Food on the Floor’ is merely another slap in the face with a tequila chaser and tons of squashed pork pies to go ‘round." *** Nicole Mendes continues to be the most dangerous woman in rock'n'roll

Rock Era Magazine @rockeramag "The clean guitar riffs and groovy drums will get you directly in the mood and as you reach the verse, you’ll be hooked already. It’s an energetic and engaging tune ... fluid, dynamic structure ...smart songwriting skills and rocking roots."

Mickey's Weekly @mickeysweekly "An intense post-punk song that gets straight to the point. It literally feels like a punch in the face. Inspired by a fight at a funeral, 'Food on the Floor' is a song to sing and jump. After the fight the food was left on the floor, everything was arranged, and they ate dirty sandwiches. Intensity at its point."

Artisti Online @artistionline "Absolutely extravagant and undoubtedly out of the box …. gives it a paradoxical sense between the bizarre and the funereal…. intriguing and catchy production that winks at an unusual art form made of smiles and double senses, which certainly manages to stand out for creativity and inventiveness."

FV Music Blog @fvmusicblog "The superb band 9 O’CLOCK NASTY are back with their addictive single ‘Food On The Floor’. With a compelling groove and memorable vocals, it is yet another standout song from this Leicester-based band. 9 O’CLOCK NASTY are one of our favourite bands for a reason!"

MangoWave Reviews @mangowavereviews "Accompanied by a butt-moving rhythm, an easy-going Indie Rock leads into the latest single by the trio from Leicester. Tension rises, the sound becomes thicker, and then the catchy sing-along chorus kicks in. The trio lets their audience lurch into the sweetest realms of Cockayne (or Schlaraffenland if you prefer) and thus open a floor on which you might be able to dance some time later - but first you will have to finish the food lying there... 9 o'clock nasty have recorded the song that fits every party. Birthday, wedding, funeral, bar mitzvah, or any other feast is suitable for this anthem. I might have mentioned this before, but better be safe than sorry: I request music by 9 o'clock nasty to be played at my funeral."

Infomusic @info_music_fr "It's feeding time! ... alternative rock music that lends itself to the good mood and smiles of the people we meet on the street today. And even if we have more masks, we are happy to catch this contagious good mood!"

Sinusoidal Music @sinusoidal.music "Roadkill Requiem. Using just the two chords to create a funky garage indie-rock anthem-this song doesn’t ask for much. With a punk rock tracks timeframe, Food on the Floor is an original in every sense of the word. Their signature style of sing/yelling the vocals remains an iconic step to identify them. There is a melancholy as the song ends, and it's to do with the song ending."

We Are YMX  @yourmusicexperience "The band seems to carry this playfully dark sense of humour into everything they do. From the artwork to the music to their personal lives, their rock ‘n’ roll banter sets the tone... The punchy, punky song is full of adrenaline and a rebellious spirit. It has that 90’s dirty teenager sound to it, and I’m all for it! Somewhat diverting from their previous sound, 9 o’clock Nasty shifted their music in a more fun and frisky direction, with a wink of irreverence and a spark of danger."

Though ‘Food on The Floor’ may be the soundtrack for a heavily intoxicated funeral, it is definitely a song you’d want to listen to on many other occasions. The track’s energy gives you an I-don’t-give-a-f* attitude that will linger throughout the day.

Roadie Music @roadiemusicmag "Without  distortion eating in all directions, but with an even greater amount of madness to compensate… So call the police, army, civil defence, Danger Mouse, or surrender completely and fall, once again, into the rhythmic and wonderfully sick lair of the 9 o'clock Nasty and their newest work, Food On The Floor."

Edgar Allan Poets @edgarallanpoets "People with their feet on the ground but with a mind full of dreams…. 9 o’clock Nasty are creating a movement more than just music, they want to become a meeting point for the indie music movement. Food on the Floor is another beautiful song, which reminded me, in a few passages of The Clash … with that typical cadence and interpretation of the legendary English bands."

Less than 1000 Followers @jpgchief  "The Nasty artists continue to amaze with their level of commitment to the comical expression of everyday life. Evolving their sound by the minute and gaining more recognition after each release, the trio is absolutely killing it.... This is a track to lose your mind, period. Throw stuff, get shit-faced, give your condolences, fuck off." ***These words brought us a lot of joy on the morning the Spotify upload seemed to refuse to release!***

Dark Strudel.  @Dark_Strudel "A bright guitar lead, upbeat drums. The shadow of a grinding bass to remind us that we are not in the mainstream. The vocals begin playful. But then the song uncoils and just as you take a breath it delivers the purest pop punch.... They veer from pop to rock and to pop again and this is a good, driving pop anthem. People I probably would not like will sing it loudly in places I would never go."

Email ThisBlogThis!Share to TwitterShare to FacebookShare to Pinterest
Labels: Food on the Floor, Review