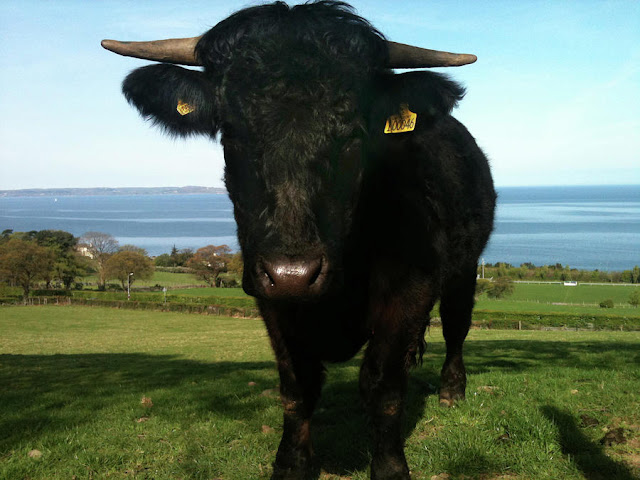 So this is a once upon a time story. Bear with though, it does have a purpose. Once upon a time there was a farm and it had fields. Many fields. In one field there lived a big black bull. He was a big horny fucker with a wet nose and massive bollocks. Huge ones. Pink. Swinging nuts. You got that image in your head? Hold the thought. Meanwhile in another field there were some bullocks. They were quite mild tempered. Black as coal, they ate and they ate and they ate. Only a total idiot would confuse the many bullocks without the huge swinging testicles and the singular grumpy bull that was in the full possession.

And that boys and girls, in a nutshell, is the story of why Ted Pepper got sacked on his first day working at a farm. It was a short career and ended in a single kick ass bull in the yard rather than a herd of docile cattle. Ted did nearly get hurt but nobody said "There There" nobody made him tea, and worse of all nobody paid him for the part-day of work. It did make for a very interesting interview at the Job Centre.

So imagine Pete and Sydd's joy when reading this lovely new review by the Edgar Allan Poets of Party.

We can't paste anything from it here because the web site has powerful voodoo to prevent the copy pasters of the world, and who is to argue with that. You've got to protect yer intellectual property in these days of post austerity fiction. (Sidenote: Doesn't "Austerity" seem like a somehow simpler and more wholesome time? No? True enough)

Chris calls us mad and we're happy to adopt the label, there is a kind of enlightened lunacy in creating all this stuff. Mad is certainly better than eclectic.  His poetry extends to comparing us to a black cow grazing free being instantly recognisable. Well, instantly recognisable to every human on earth, past, present or future with the exception of Mr Ted Pepper who actually lives opposite a farm and owns green wellies.

Thank you Chris at the Edgar Allan Poets for this review and all the others, you rock our world and we hope one day to meet you and raise a glass.