Loopy? Us? Sinusoidal Drop a Monster Review for Politic 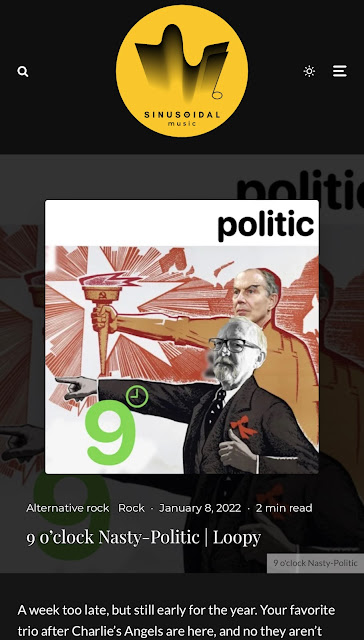 So we seek attention. Always have. Must be in the water, But the review from Sinusoidal caused a stir in the Koala Studio recreation area.

It is a scorcher of a review. Rather than read all the bullshit we wrote about it below, do yourself a favour and check Nish at his poetic best. He is now the most dangerous man in modern music.

So Ted got a monocle. He is wandering about trying to see and basically walking into everything. Pete has found a trumpet and is launching honks and warbles. Sydd is wrapped in disco lights, so tightly wound he will probably never get out without the aid of wirecutters, but he does have the use of a mobile phone and the wit to use it. 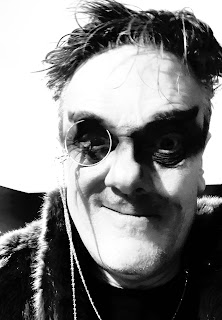 As Sydd reads the review from Sinusoidal out, Ted and Pete gradually melt into a heap of simpering honk. It ain't pretty. Bloggers are described as The Enemy in the review, but we don't see it that way. We would love to have revealed our inner thoughts to Sinusoiudal, so in the absence f questions, here are some answers.

Your favorite trio after Charlie’s Angels are here, and no they aren’t The Three Musketeers. 9 o’ clock Nasty bring in the good tidings for the year.... dial for weird must always have a marking towards the right, and I hope we’re cranking it up early this year.

We struggled with our favourite threes, thanks for asking. We'd go with the Teenage Mutant Ninja Turtles, the Three Johns (fucking great band) or Millband, Corbyn and Starmer. Sydd would make a good Charlie in Charlie's Angels, Ted would of course be Bosley, and Pete Brock the glitter man.

You have a dial for weird? We have a big brass lever. On or Off Pal. It is binary. not analogue.

The boys open up the gift with King Thing, a rapid fire, funky track. The drumbeat is a solid, up-tempo version of Zeppelin’s When the Levee Breaks, and they nailed the sound detail on that as well. The guitars have their own voice, so you know they have their opinions too.

Pete's guitars are very opinionated. The drum track isn't actually Zep, it's taken from a song of our own, "What Have You Done For Me Lately?" and accelerated about x3 in the computer-thingy. Going digital has given us a lot of new tricks. We layered two versions of the drum-track, one "straight" and one subsonic that only runs in key parts of the song. High volume with big speakers recommended.

The second track is a rather ominous, Get Into Them. At least, the first part of it. An interesting dance programmed drum beat comes to play with the group here, and its all fun and games.

The track is actually built using a series of Bhangra samples. We listen to a lot of pirate radio hereabouts and wanted to make something that would work in that format.

I would like to call the track their approach to some hip-hop as well, but I wouldn’t. I know they’ll be giving that a fair shot soon, and I want my references library to be wide open to have a great time.

Ah well we do have a couple of hip-hop things on the operating table.

We've made a "Street Circuit" mix for Playboy Driver, our March single, which is a pretty straight down the line hip hop reworking of a rock song. It's a tried and tested formula and we've played it straight.

We're working on a more out-there piece entitled Shoot! Shoot! The Judas Goat! It will be 50 degrees of mental when it's done but our greatest concern is that we want to rap without sounding like Robbie Williams. We genuinely would love to work with a rapper who is prepared to fly the freak flag. The two we asked so far ran away.

Get Into Them has a part 2, if you’re looking at sequels like Quentin Tarantino. Same characters, but what-the-shit scenario. Going for a softer The Clash/Strokes vibe,

There is a third, even softer part but we haven't recorded it just yet, At one point we wanted to make an EP where all the songs were different versions of Get Into Them.

A PG rated version for all the kiddies to sing along to as well. I like it.

Well it has the same number of Fucks but they are less shouty. Shouty Fucks are probably what parents should worry about.

So there you have it. A catalogue of random expeditions, that they’ve been after. 9 o’clock repeatedly set these benchmarks for themselves, but there’s no grading scale.

Like Gandhi said long ago, “All I want are my two clean khadis, and the year beginning with 9 o’clock Nasty”.

Yeah, he said that right after we micro-dosed him. We wanted to pull Gandhi into our universe on a record cover, him having some darker aspects to his file that seem to have been media-washed, but there are so many more deserving targets downrange there just aren't enough songs to do covers for. We do have an absolutely filthy one with Mother Teresa for sometime.

Thank you Nish, and thank you Sinusoidal. You can find our song on the Sinusoidal playlist on Spotify (where plays make artists no money but hey, at least your being ripped off by hipsters)